From Jamaica To The World

An essay by Wayne Marshall exploring Popcaan and his debut album Where We Come From.

While his former mentor Vybz Kartel has been locked up, Popcaan has kept the torch aloft, rising to the top of the dancehall field behind bars of a different sort: the verses and hooks that have made him a favorite from Jamaica to Japan.

Building on the buzz that began with his star turn on Kartel's 2010 smash "Clarks," Portmore's new native son has since made a name for himself with local hits like "Ravin" and "Clean" and international anthems like "Party Shot" and "Only Man She Want," the latter crossing over to Billboard's R&B/Hip-Hop charts and inspiring Busta Rhymes to add a verse. Filling shoes once occupied by Shabba, Beenie, and Sean Paul, Popcaan has become the premier reggae vocalist for cool-and-deadly collabos with hip-hop's finest: his 2013 feature on Pusha T's "Blocka" was also sampled by Kanye for a track on Yeezus. Another sure sign of resonance, the singjay's trademark Yaow! has become a standard drop for mixtape and radio DJs from Kingston to Brooklyn. Now in 2014, Popcaan gets his due as a breakout artist with a debut album aimed at dancehall devotees and the iTunes massive alike.

In turns uplifting and haunting, reverent and rude, Where We Come From gives voice, as the best reggae does, to the contradictions of life in a society rife with inequities and yet so rich. Whether odes to the ghetto or the good life, Popcaan's lyrics bring realist portraits and utopian visions into dynamic tension. Songs about struggle and sex and happiness occupy the same space because they do. And whatever the topic, Popcaan's infectious positivity comes through.

Like his predecessors in crossover without compromise, Popcaan appeals to listeners outside of Jamaica precisely because he brings a distinctively Jamaican voice to the proceedings. In a world gone global, Popcaan occupies that sweet space of possibility where a deeply local accent communicates to outernational listeners. With his patois lyrics, plainspoken and poetic, his own takes on the latest slang, and his vowels stretched in that Portmore twang, Popcaan is unapologetically uberlocal in address. But since dancehall is itself a globe-spanning style and symbolic code, Popcaan's performances are also pitched to the world. For all the downhome detail, nuff translates—and plenty comes across in universal terms: hustle for the money, too damn evil, everything is nice.

Nimble with the syllables, sometimes Popcaan's flow nods to Kartel's fluid flip-tongue tumble, while elsewhere his badman balladeering recalls a modern wailer like Mavado. As a vocalist who can rap (or deejay, in reggae parlance) as well as sing, Popcaan is a singjay par excellence—a winning combination in a global pop culture remade by the likes of Akon, Drake, and other hip-hop/R&B stars who bring a sing-song lilt to their performances. 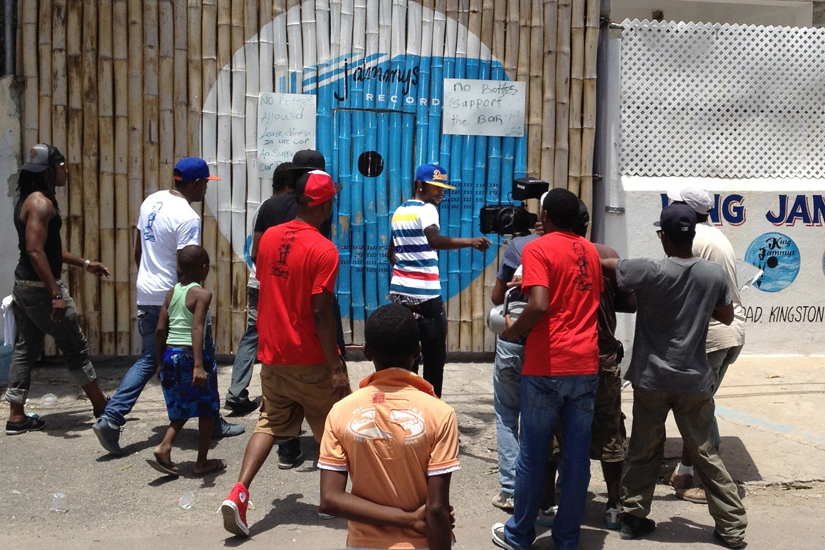 On the set of "The System" video shoot. 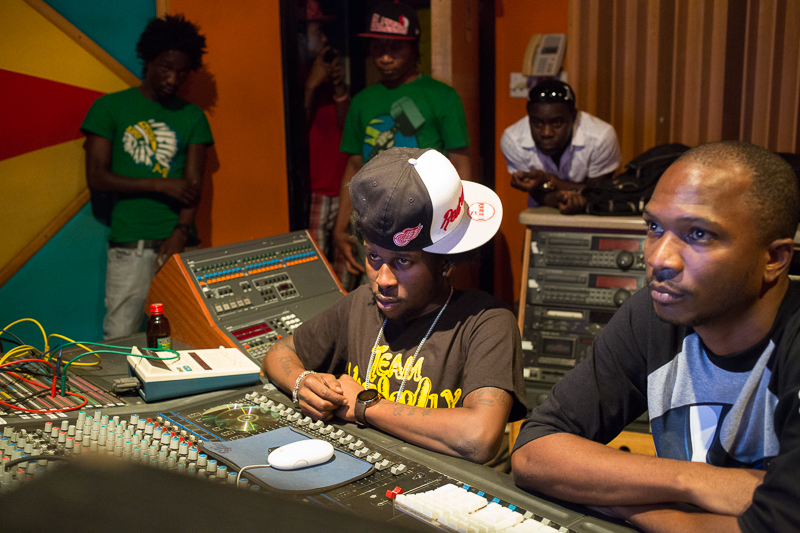 For all its diversity, unlike many a dancehall album, Where We Come From is no mere hodgepodge of previously released singles. What gives it greater coherence is the concerted collaboration between Popcaan and the album's executive producer, Dre Skull of Brooklyn's Mixpak Records. Over the past few years, Dre Skull has demonstrated an inspired devotion to reggae style and has fast become one of the genre's premier producers. His Kling Klang and Loudspeaker riddims recently reverberated across the dancehall world, thanks in part to Popcaan's trenchant turn on "The System," and his behind-the-boards work on the Snoop Lion project and album-length collaboration with Vybz Kartel, Kingston Story (2011), have cemented his stature. Together with a handful of kindred vibesmen, including Mixpak's Dubbel Dutch, Jamaica's Anju Blaxx and Jamie YVP (Young Vibes Productions), and Sweden's Adde, Dre Skull has produced an album for Popcaan that boasts a signature vibe and a distinctive palette.

Where We Come From presents a fresh take on dancehall that stays faithful to the model by doing what the genre has always done: sculpting global pop and world club into Jamaican shapes. All of the album's producers bring to the boards a fluency with pop, rap, and dance music from around the world. They also share a penchant for making melodic, emotive dancehall tracks. A headphone-friendly album with soundsystem-sized ambitions, the music of Where We Come From aims at club spaces and head spaces, at the dancehall massive and the various audiences of contemporary bass culture. Engagement with electronic dance music of all stripes animates the album's instrumentals, subtly evolving forms that make Popcaan's accompaniment as interesting as it is functional. Songs build slowly and with determination, details unfolding in their time as arrangements shift: a fresh synth here, new pattern there, sustained tones to staccato breaks, echoes bubbling in the background. The textures are layered but clear, the timbres lush if ethereal.

One might note a touch of house or techno in the forms and filters, or hear hip-hop in the skittering hi-hats and rolling snares, but these trappings enjoy an unremitting co-presence with classic reggae signposts, especially dancehall riddims from the 1990s. Pride of place is reserved for kick drum cross-rhythms, pulsing bass tones, and weird, sometimes saccharine synths (which just as often suggest the 1980s or 2020s). Who knew the slippery edge of schmaltz could also be the bleeding edge of musical futurism? Jamaicans did. So do Dre Skull and brethren. Their album-length collaboration with Popcaan succeeds as a special synthesis, resting assured in its local resonance and its currency in the wider world.

From Jamaica to the world, as they say. But, if one's taking sides, Popcaan casts his lot with young people struggling, and bubbling, through life in the ghetto. "For my ghetto youth them," he intones on the album opener, "Hold On." An epic production by Dre Skull, Popcaan's ode to resilience comes down like a sermon from the pulpit of a crunk gothic church, a booming bell toll leavened by synth strings proclaiming a sense of solidarity that is anti-partisan, pan-garrison, and transnational—not to mention, Jamaican to the core. 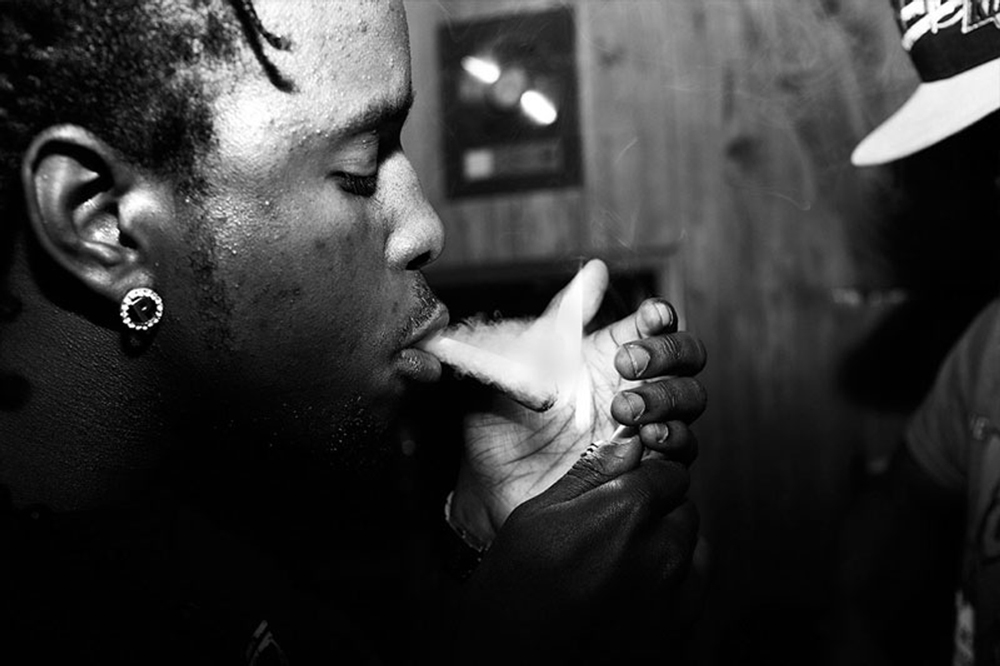 Popcaan takes some down time from recording at Tuff Gong studios. Photo by Shane McCauley

Even with all the detail packed into each track, there is a respect for space and vibes as Where We Come From stays true to one of reggae's finest features: restraint. The riddims never sound too busy, and neither does Popcaan, in command at the helm of this sleek ship that Mixpak built. No song exemplifies the singjay's ease in these settings like the album's lead single, "Everything Nice," produced by Dubbel Dutch. Here we have the essential elements of the collaboration: motivational chord changes, fluttering synths, and deep dancehall rhythms, with Popcaan's moonwalk peptalk making everything sound nice indeed, even if the "bills dem pending." An ode to release and pleasure, "Everything Nice" opens the gate for the album's prevailingly uptempo, uplifting vibes, even when the subject shifts from parties and partners to evil and injustice.

In touch with dancehall currents even as they aim to rework them, Dre Skull and Dubbel Dutch, who produce the lion's share of tracks on Where We Come From, bring aboard a crew of remarkably sympathetic riddimists to round out the album, from frequent Popcaan collaborators Anju Blaxx and Jamie YVP to Sweden's breakout talent, Adde, who previously produced big chunes for both Popcaan ("Ravin") and Kartel ("Summer Time"). Adde's riddim for "Waiting So Long" blends right in, skittery Southern snares tripping over dancehall drums and bass while plucky synth lines dart in and out. Jamie YVP's work on "Number One Freak" also marries dancehall drive to stuttered hi-hats, with percolating synths over a pop-rock progression for full forward motion, airhorn included. And the title track "Where We Come From," produced by Anju Blaxx, ties the album together with another four-chord processional, a piano-driven toast that closes the album like a valedictory address.

At bottom, Where We Come From has a sound. It holds up, and clicks together, as a body of work. In an age of Soundcloud specials and iTunes one-offs, a moment when pop, reggae, and club acts are increasingly focused on singles, an album-length statement of such consistency is a rare and special thing. What we have here is no less than another sustained and fruitful collaboration between Jamaica and New York, taking its place in a long line of dancehall classics made neither in Kingston nor Brooklyn but in that limbo space where synths flicker, snares skip across the bar, and Yo! becomes Yaow!

Wayne Marshall is a technomusicologist who writes and teaches about music, technology, and culture from Cambridge, MA. Hip-hop scholar since being knee-high to a duck, he wrote his dissertation on reggae, edited the book on reggaeton, and publishes an acclaimed blog at http://wayneandwax.com.